OMAHA, Neb. (July 12, 2018)—Two University of Nebraska Medical Center scientists and their novel Easi-CRISPR genome-editing technology have contributed to a significant breakthrough in the fight against cancer.

The discovery may lead to new and safer treatments for autoimmune and other diseases, including rare inherited disorders. 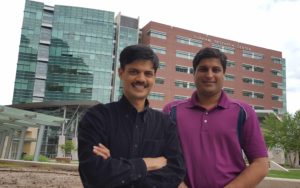 From left are Channabasavaiah Gurumurthy, Ph.D., and Rolen Quadros.

The two UNMC scientists – Channabasavaiah Gurumurthy, D.V.M., Ph.D., associate professor of developmental neuroscience at the Munroe-Meyer Institute, and Rolen Quadros, transgenic researcher in the Mouse Genome Engineering Core Facility – collaborated with researchers at the University of California, San Francisco (UCSF) to develop a technique in which they genetically reprogrammed T cells, the body’s foremost immune system fighter, to find and destroy cancer cells in mice.

The new method, described in the July 11 issue of Nature, offers a robust molecular “cut and paste” system to rewrite genome sequences in human T cells without using viruses to insert the DNA.

The collaboration began more than two years ago when Dr. Gurumurthy met Alex Marson, M.D., Ph.D., associate professor of microbiology and immunology, UCSF, and principal investigator of the study, at a scientific conference where they discussed the idea of using the Easi-CRISPR method to engineer T cells.

Theo Roth, a student pursing M.D. and Ph.D. degrees in UCSF’s Medical Scientist Training Program and first author on the study, tested the idea and then did a series of other technical improvements to efficiently engineer T cells.

Before this breakthrough, numerous attempts by many researchers to place long sequences of DNA into T cells had not been effective. “The typical success rate of inserting longer DNA sequences into T cells is about one percent or less,” Dr. Gurumurthy said.

“Easi-CRISPR provided us one of the ways to develop an efficient strategy to insert longer DNA cassettes into T cells,” he said. “With this method, we can take a cancer patient’s blood cells, isolate the T lymphocytes, manipulate the genome and train them to kill cancer cells, then transfer them back into the patient. Engineering a patient’s own T cells to find and kill cancer cells would be the most effective way of treating cancer.”

T cells are naturally attracted to an antigen on the cancer cell surface. Genetic engineering turns those cells into super cancer cell killers.

To demonstrate the new method’s versatility and power, the researchers used it to repair a disease-causing genetic mutation in T cells from children with a rare genetic form of autoimmunity and also created customized T cells to seek out and kill human melanoma cells.

Viruses cause infections by injecting their own genetic material through cell membranes, and since the 1970s, scientists have exploited this capability, stripping viruses of infectious features and using the resulting “viral vectors” to transport DNA into cells for research, gene therapy and in a well-publicized recent example, to create the CAR T-cells used in cancer immunotherapy.

T cells engineered with viruses are now approved by the U.S. Food and Drug Administration to combat certain types of leukemia and lymphoma. But, creating viral vectors is a painstaking, expensive process, and a shortage of clinical-grade vectors has led to a manufacturing bottleneck for both gene therapies and cell-based therapies.

Even when available, viral vectors are far from ideal, because they insert genes haphazardly into cellular genomes, which can damage existing healthy genes or leave newly introduced genes ungoverned by the regulatory mechanisms that ensure that cells function normally.

These limitations, which could potentially lead to serious side effects, have been cause for concern in both gene therapy and cell therapies such as CAR T-based immunotherapy.

“There has been 30 years of work trying to get new genes into T cells,” Roth said. “Hundreds of labs can now engineer these cells. They can work with increasingly more complex DNA sequences and try more possibilities, which will significantly speed up the development of future generations of cell therapy.”