UNMC Vice Chancellor Leuenberger to step down in July 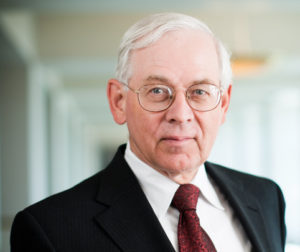 OMAHA, Neb. (May 28, 2015)—A key figure in the University of Nebraska Medical Center’s dramatic growth over the past three decades, Don Leuenberger announced today that he will step down in July as vice chancellor for business and finance.

In his role as vice chancellor, Leuenberger, 70, was responsible for all campus facilities, budget, human resources, information technology, finance/business services, security and legal service. More than 600 people are included in these departments.

“Don has had an outstanding career,” said UNMC Chancellor Jeffrey P. Gold. “I feel very fortunate to have had him on our leadership team.  He wore many different hats and has an amazing blend of talents. I continue to look forward to working with Don as he takes on a new role.”

Dr. Gold said Leuenberger will continue to be involved in several of UNMC’s key initiatives including relations with China and in economic and community development.

Dr. Gold said a national search will be conducted to fill the vice chancellor position.

Among some of the highlights during Leuenberger’s tenure were:

“When you look at anyone’s legacy, I think you have to look at the people with whom you have worked. I’ve been privileged to have worked with and recruited some outstanding leaders on campus. They, in turn, have recruited and mentored others – many of whom will have a significant impact on UNMC for decades to come.

“Most importantly, we have established a reputation within the entire university for innovation, capability and integrity – and always providing quality service. That means everything to me.”

Complacency will not be an issue in the next phase of his life, he said. An avid bicyclist, Leuenberger plans to ride in RAGBRAI (Register’s Annual Great Bike Ride across Iowa) on July 17-23. It will be the seventh consecutive year he has rode in the event.

A fixture in State Capitol

Don Leuenberger’s name is widely known in the halls of the Nebraska State Capitol building.

Working in the Nebraska State Budget Office and as state tax commissioner for the Nebraska Department of Revenue, he served on the staffs of five Nebraska governors and the cabinets of four. They included Norbert Tiemann (staff only), James Exon, Charles Thone, Kay Orr and Ben Nelson.

Between 1995-1998, Leuenberger took a leave of absence from UNMC to serve as director of social services/policy secretary for the Nebraska Department of Health and Human Services. In this role, he led a massive reorganization effort involving the merger of five state agencies.

News UNMC Vice Chancellor Leuenberger to step down in July