Many drugs have the same problem.

They often bumble around, interacting with whatever tissue they meet, blind to the difference between diseased and healthy tissue.

That’s why, when a medication stumbles into enough healthy cells, a wide range of toxic and sometimes scary side-effects are often the result. 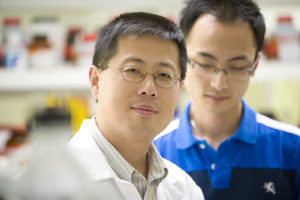 Making smarter drugs is certainly possible—if you have about a decade to kill and a few hundred million of spare change lying around. But an intelligent and skilled researcher could save a lot of time, energy and increasingly rare grant funding by looking for ways to improve existing drugs.

It sounds like a simple enough process: If “simple” also includes things like successfully landing a rover on Mars or understanding on a molecular level the complex intricacy and interaction of molecules within human physiology.

A pharmaceutical chemist at the University of Nebraska Medical Center, Dong Wang, Ph.D., is that rare breed of scientist that makes this kind of research sound easy. He’s a drug designer of sorts, looking for ways to help the tried and tested drug molecules to improve their ability to differentiate the good from bad.

“There are a lot of beautifully designed drug molecules out there,” said Dr. Wang, a professor in the UNMC College of Pharmacy’s Department of Pharmaceutical Sciences. “This is about using them in a better way.”

Dr. Wang’s research interests have a particular focus in musculoskeletal issues, which can be anything from broken bones, joint replacement and osteoporosis to rheumatoid arthritis, lupus and even spinal injuries.

“We want to make the drug work better, work more efficiently, and restrict them from causing harm,” said Dr. Wang.

By making drugs smarter, Dr. Wang hopes to remove a significant amount of the associated side-effects. If his successes are as dramatic as some of his early tests suggest, then his approach could arm physicians with familiar treatments that are more potent and much less harmful to patients.

Several of his prodrugs have attracted wide industrial interests from across the globe, including a new design on an existing lupus treatment. By encapsulating a powerful anti-inflammatory steroid, dexamethasone, in a targeted delivery vehicle, Dr. Wang said his animal tests showed near-100 percent effectiveness at preventing dangerous kidney inflammation, lupus nephritis, which can lead to kidney failure.

In testing lupus animals already presenting with nephritis, his formulation eliminated the inflammation in about 80 percent of the animals, and in the remaining 20 percent his version of treatment still reduced the condition to a more mild form. Dexamethasone alone only stopped further progression of nephritis, and did virtually nothing to reduce it, Dr. Wang said.

Dr. Wang cautioned that such dramatic results are not typical for all of his designs, but improving what already exists in a safe and cheaper way to improve the effectiveness of existing treatment strategies.

“Using intelligent design you can dramatically change the landscape, and provide the physician a better alternative to treat the patient,” said Dr. Wang. “And the health care cost may also be significantly reduced.”

Charles Litton is the communications associate at UNeMed Corporation, the technology transfer and commercialization office for the University of Nebraska Medical Center. He can be reached at charles.litton@unmc.edu or 402-559-2468.