Any combination of diabetic complication is a virtual certainty.

Far less certain, however, is how so many different systems could be affected by diabetes, which partly explains why most modern treatments only help manage the disease. 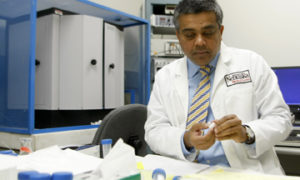 Keshore Bidasee, Ph.D., a researcher at the University of Nebraska Medical Center in Omaha, may have found a new way to treat diabetes that could improve the function of damaged organs like the kidneys, heart and eyes while also lowering blood sugar levels.

Understanding the common thread between these wide-ranging diabetic complications lies at the foundation of potentially groundbreaking research at the University of Nebraska Medical Center. That research could do far more than just help 21 million Americans simply manage their diabetes. It could prevent those complications in the first place, and may even help repair damaged organs.

UNMC’s Keshore Bidasee, who holds a doctorate in analytical chemistry, believes he has the culprit, and may have found a way to keep it from wreaking its usual havoc.

In its essence, diabetes is a disease of the blood vessels. So, any organ that relies on blood supply—which is to say all of them—will suffer from the long and continuous assault that diabetes wages.

There are three major types of diabetes.

Type 1 diabetes begins in the pancreas with the loss of beta cells, which normally release a blood-sugar regulating hormone called insulin. But most people suffer from the most common form: Type 2 diabetes, where the pancreas still has the ability to produce insulin, but the body develops resistance to the hormone. A third, although rare, form of the disease may occur in about 5 percent of expecting mothers. Known as gestational diabetes, this form is often temporary, and the mother recovers soon after childbirth.

In all types, the amount of sugar in the blood stream increases, and that somehow damages the blood vessels. It was previously unknown what exactly causes that damage or if the cause was specific to each organ.

Bidasee and his team think they found the answer in a small molecule called methylglyoxal, a naturally occurring byproduct of high blood-sugar that can cause a cell to “misbehave.” The misbehaving cells can then set off a chain reaction that destroys the endothelium, the single layer of cells that line the inner walls of blood vessels that control blood flow and pressure.

“What this means is high levels of methylglyoxal is a troublemaker,” said Bidasee, an associate professor in UNMC’s Department of Pharmacology and Experimental Science in the College of Medicine.

Completely eliminating the “troublemaker” would create additional problems. Methylglyoxal serves an important function beyond its destructive role in diabetes. It helps regulate sleep, and rids the body of other dysfunctional cells.

“Remove them, and you’re going to be in trouble,” Bidasee said.

With the help of the National Institutes of Health and the Gene Therapy Program at the University of Pennsylvania, Bidasee’s team created a harmless virus that “infects” methylglyoxal-producing cells with an enzyme called Glyoxalase-1. The enzyme eliminates the “troublemaker” where it causes problems, while leaving it free to perform its beneficial functions.

“That was completely unexpected,” Bidasee said. “Sometimes you get lucky, right?”

UNeMed Corporation is the technology transfer office (TTO) for the University of Nebraska Medical Center, serving researchers, faculty and staff who develop new biomedical technology and inventions. UNeMed strives to help bring those innovations to the marketplace for a healthier and better world.